I debated on whether I should post this or not, but I thought it would be good to do a preface to the educational posts I plan to do as I learn more about autism.

I’ve struggled with my mental health for as long as I can remember. I always felt this overwhelming feeling as a child as though I was an outsider. I felt, far away from everyone else. The world felt too loud, too intimidating, and to me it was easier to exist in the world inside my head than it was in the real one. Things that other people cared about, didn’t interest me. And so I stayed inside my head, for years. I wouldn’t speak unless I was spoken to. And of course other children and peers found this strange - I acted different and this made me a target for mean children. I didn’t like the attention it drew to me, so I conditioned myself to fit in. I would wear clothes that everyone else wore, do the same social activities. Over years, I taught myself how to socialise, what the correct things were to say - so that people would like me, but also to the extent where people wouldn’t notice me - I could blend in.

I didn’t really have an explanation for all of these feelings - when I was diagnosed with anxiety and depression as a teenager, I put it down to that. It wasn’t until this year when a psychiatrist suggested I should get assessed for autism, that things started to make sense. Autism presents in afab people so much differently than it does in amab people. Girls/ afab are so much harder to diagnose, because they learn how to ‘mask’. Essentially, they learn how to socialise and cope through mimicking other people. When this was explained to me, things suddenly clicked. This is what I had been doing for so many years. I was an observer for over half of my life - and I learned how to do things that everyone else did.

Looking back, I feel a lot of sadness for the person I was, I changed myself for the world. I truly think I lost a part of myself in those years, that I am only now trying to let out again. But I don’t look back in complete sadness, because I know I was just doing what I had to do to cope in a nuerotypical world. Since finding out about the potential/now diagnosis, something that I have been struggling with is identity. If the way I interact with people the way I do, has been formed through mimicking other people - then who really am I underneath all of that?  Such a question is not something that can be answered overnight - but I know one thing, I have plenty of time now to figure out who I am, and I will never change myself for the world again.

Being autistic is another part of my identity that I am learning to love, and I hope that through this journey I can help someone else to realise that you don’t have to change who you are to fit in with the way the world expects you to be. You are worthy of love, success, happiness and so much more, just as you are

at February 08, 2022 No comments:
Email ThisBlogThis!Share to TwitterShare to FacebookShare to Pinterest 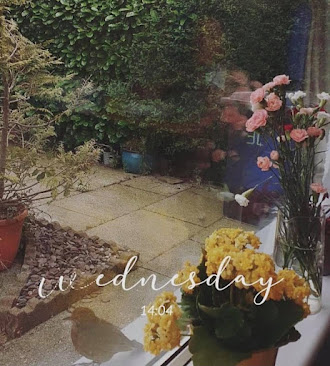 This week I got to visit the exact bird that I named a poem after.

During Christmas week 2020, I lived in an elderly neighbours house caring for her 24/7. Being in a new house and alone can easily get quiet. You seek company and familiarity. Thankfully I was able to find this in the birds.

There were 3 specific birds that would visit the old ladys house everyday. And she would ask me to feed them raisins. I recently went back to her house to look after her for the afternoon. Her son informed me that only 1 of the birds still comes for visit. And that it did. It came back all chirping and ever so friendly. I found it comforting that the only bird that still visited, was the one I took a picture with for my publication. There is something about comfort in familiarity. I find it comforting to know this bird is still doing well. It may never know the impact it had on me
The Little Birds

The days full of stillness, are almost too

It can be hard to see hope for better days, when still so consumed by grief,

Perhaps it’s okay if we don’t see it,

But can allow ourselves to feel.

It is a little sunny today,

And the little birds will come out.

Not unaware of our battles, simply facing different ones.

And really wanting to build a home for themselves,

Is what we need to do too,

Physically, but also in our heads.

For that is where we spend a lot of our time now,

It deserves a space free for blooming,

Space for all, even the weeds,

Everything has a place, a chance, to grow. 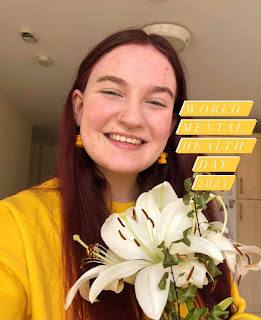 I talk about mental health everyday so there’s not much I can say that I haven’t already said. I will share a bit of writing though - a sort of letter to anyone who is currently struggling. 💛 (Swipe to see)

To anyone who may need to hear it;

- I believe in you

- Your best is always enough

@youngmindsuk are encouraging people to wear yellow to show young people that they are not alone - you can donate to their charity here https://www.youngminds.org.uk/support-us/fundraising 💛 or in the link in my bio! #HelloYellow 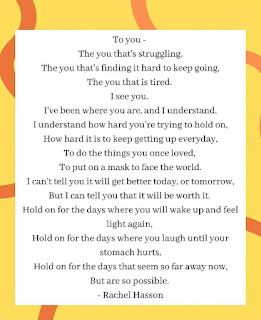 My poem was featured on a podcast! 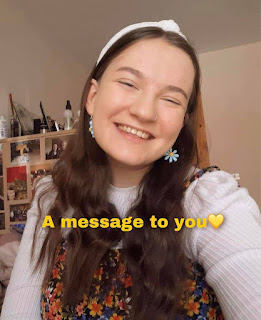 This time last year, for #mentalhealthawarenessmonth I shared my poem ‘A message to you’ on this account.

I wrote this poem in the notes of my phone when I was going through an episode of depression, and felt that my own words were all that I had left.

It was not a piece of writing that was ever intended to be read, and it was the first time I really shared anything that I had wrote.  But I’m so glad I did.

After sharing this poem on my account I really started committing to mental health activism, and finally believed in the power of my own voice.

From something that came from a place of such pain, it is so heartwarming to see it become something positive.

This is your reminder that your story matters. Your voice matters. You are powerful. And you can keep fighting 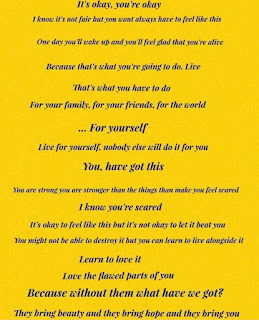 The only opinion of yourself that matters is yours 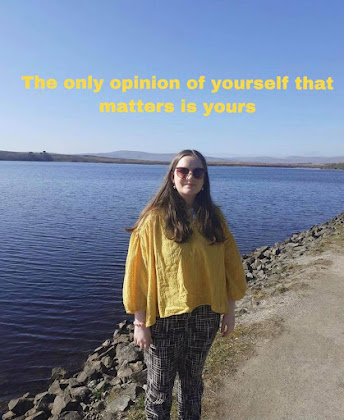 The only opinion of yourself that matters, is yours💛🌻

When I was at school something that I struggled with a lot was social anxiety. A big part of this was being hyper conscious of what people thought of me. Did people like me? Did they think I was a nice person? Did I take up too much space? I tried to make myself invisible, I wished that I was, so that I would be free of other peoples perceptions of me.

I like to think of myself as a positive person. But recently, too many times I’ve found myself comparing myself to people, being afraid of what they think of me, etc etc.

So here is a reminder to myself and anyone reading this, that your opinion of yourself, is the only one that matters. Fuck what other people think. Your relationship with yourself should be the most important one, the one you give the most love to.

International day for Persons with Disabilities

International day for persons with disabilities

This year's theme is "not all disabilities are visible".
I know all too well how invisible conditions can impact your daily life and it can be made harder by a lack of understanding from everyone from friends to doctors. Just because you can't see that someone is struggling, does not make those struggles any less valid.
Being an ally to people with disabilities is crucial now more than ever! It is so shocking to me that is has taken a pandemic for society to make things more accessible for disabled people. And I hope that they will keep up this energy of making working from home accessible when people start to go back. It is simply not good enough and I will not accept it as normal and standard that SO much of our daily lives are not accessible.
If someone tells you that they are struggling with a condition, ask them how they can support you, research the condition, and be an activist for people with disabilities
I'm the Treasurer for a qub society
QUB Inclusion
and we are all working very hard to spread activism and awareness for invisible illnesses and we provide a safe space for students with disabilities, chronic illnesses, mental health conditions and who are nuerodiverse to make friends! I'm so proud of the work those guys are doing and if you're studying in Belfast please do check us out!
All the love to my friends with disabilities today
[Photo description: A picture of me holding a written sign that says not all disabilities are visible ] 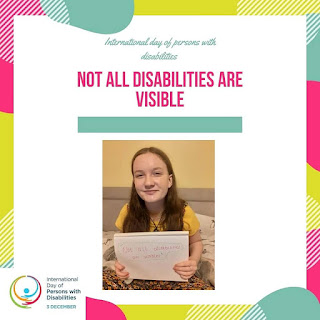 at December 04, 2020 No comments:
Email ThisBlogThis!Share to TwitterShare to FacebookShare to Pinterest

It's okay to rest

I really wanted to do a post to emphasise the importance of giving yourself breaks and time to rest.

So much of our lives are caught up in hustle culture and the pressure to constantly be productive is ever growing.

Just remember, we are only human, and we are all on different journeys and paths. Life is not a race, and you shouldn't have to feel guilty for resting and taking time to regenerate. 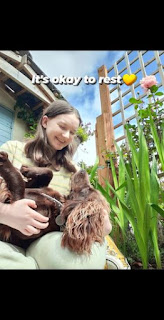 I too am a victim of hustle culture and I am constantly doing stuff for different projects and commitments. But I thrive off of keeping myself busy. That is totally valid. Issues arise when we continue to be busy and don't allocate time for ourselves. Don't wait until you're burned out, try and get into a good routine of doing things that you enjoy, without there having to be an end goal!

Some things you can do to take a break;

- Have a self care day/ Night

- Listening to music that you really like, make new playlists

- Make a plan of your next few days so that you're not overwhelmed!

Make sure to look after yourself, you deserve rest

at December 01, 2020 No comments:
Email ThisBlogThis!Share to TwitterShare to FacebookShare to Pinterest
Older Posts Home
Subscribe to: Posts (Atom)

I debated on whether I should post this or not, but I thought it would be good to do a preface to the educational posts I plan to do as I le... 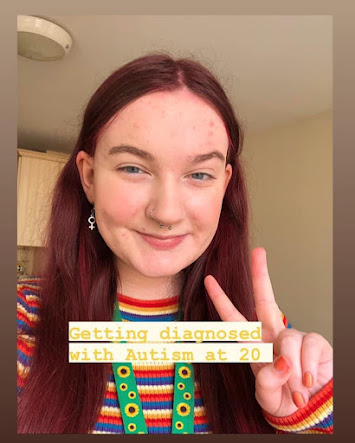 Rachel Hasson
I'm Rachel! I'm currently studying English and History! I am a mental health advocate and will be writing about all things self love and positivity! 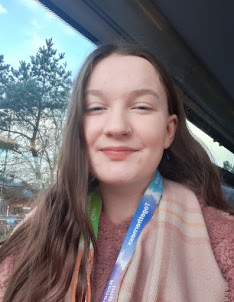